Description of the Cabin 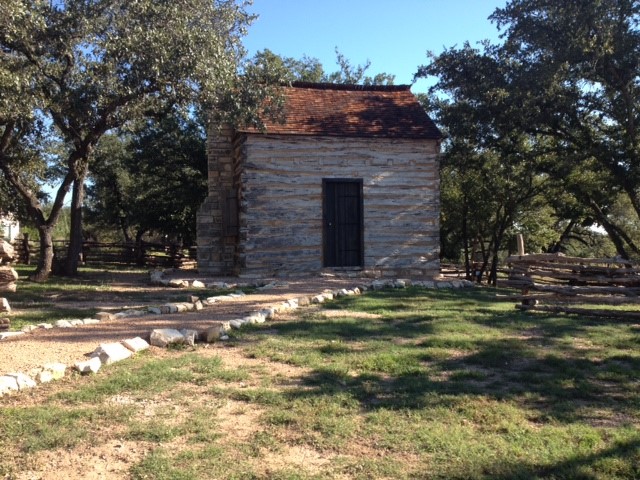 The historical cabin can be factually described as a Civil War era one-and-a-half story single-pen log home, constructed of high quality native Texas cedar wood, and built by a person or persons with a high skill-level techniques common with those of German or Bavarian heritage.  In the humorous words of a professional civil war restoration historian, the cabin is an artifact representative of 1860's technology translated with a Texas drawl, Germanic practicality, and a Yankee skill-set, which clearly represents living in a rustic or rural environment under the simplest living conditions of the era.  The construction corresponds to that required of a post-Civil War Homestead Act structure.  Former area resident Gwen Wunneberger and her husband purchased the cabin in the mid-1950s. The City of Lakeway purchased the cabin in 2011, and moved it from the area it previously resided near High 5 in the Oaks Shopping Center to its current location next to City Hall. 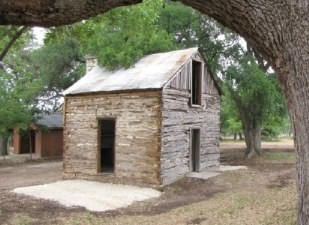 Through a computer data base, the property was formally identified as Travis County Survey Number 50, and it was originally issued to a German Immigrant named August Liebelt.  Subsequent in-depth research through official records and other historic information concluded the following: August Liebelt's estimated date of birth as shown on his death certificate was October 1832; at 26-years-old, he boarded the immigrant ship Ernst Moritz sailing from Bremen Germany, with a destination of New Orleans.  He listed his home as Seifertsdorf, Germany; on August 6, 1862, he was listed as a member of Company A. 97th Regiment, Illinois Infantry in the Federal Army; August Liebelt was discharged from the Federal Army in Galveston, Texas on July 29, 1865; on December 15, 1869, he occupied as an unmarried man, what would become 80-acres of public land under "An act to regulated the disposal of public lands of the State of Texas" (later approved by the state legislature March 24, 1871); on December 1, 1872, Liebelt, with friend and Flintrock postmaster C.P. Reinke, conducted an official survey of 80-acres of public land to which Liebelt is entitled by virtue of "2nd section of an act of restitution approved August 12, 1870 for the sale of public domain." The survey was certified on December 27, 1872, and recorded on Page 307, Book 12, as Survey No. 50 in Travis County, Texas; on July 17, 1874, he was issued Patent (Title) No. 709. Vol. 1, Abstract No. 508, File No. 000153 as the original Grantee and Patentee for 80-acres survey as noted above.  This data substantiates that one German immigrant August Liebelt was most likely the builder and first occupant of the Civil War era log cabin relocated from the former Wunneburger tract to its present site adjacent to Lakeway City Hall in November 2011.

August Liebelt was seemingly a very active individual.  Having lived on the 80-acres for barely a decade, on May 20, 1881, he sold the property, livestock, and all of his holdings- with the exception of a single mare- for $525 dollars to one John Simon Oechsner.  Further official records of his activity are void for two-decades, until he purchased 60-acres of land in Grayson
County, Texas with a down payment of one-dollar, and six promissory notes in the amount of $200 dollars each at 8-percent annual interest due in November each year payable to J.A. McEver, who then held the lien on the property.  It appears that Liebelt remained unmarried for his entire life, as his official death record shows that, as a single man, he passed away at age 79 due to heart disease in Sherman, Texas, on July 9, 1911.  An exact replica of his headstone, which is located in Sherman, has been placed adjacent to the log cabin he constructed some forty-years prior to his death. 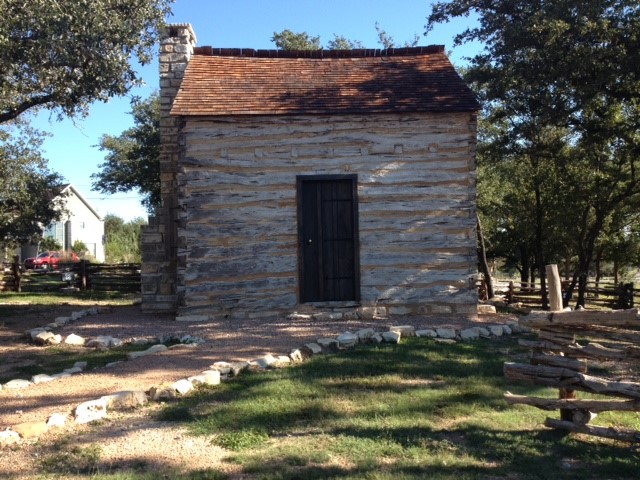 In the fall of 2010, the Lakeway Heritage Commission appointed an official committee to formulate a 3-5 Year Plan for the Heritage Center goals, objectives, and activities. In January 2011, the Commission formally accepted in the plan the restoration of what was then described as the Wunneburger cabin, due to the fact that the structure was located on property formally owned by Joe and Gwen Wunneberger even before the early days of Lakeway's development in 1963.

In April 2011, the Heritage Center Archivist was contacted by local Sears franchise owner with an offer to apply for a historic preservation grant through Craftsman® Tools; a $2500 dollar grant was approved, awarded, and later accepted by the mayor of Lakeway in June 2011.  In the meantime, the commercial developer who previously purchased the 40-acre Wunneberger tract offered to donate the historic log cabin to the City of Lakeway, with the caveat that it must be relocated before the end of the year; otherwise, the cabin was to be demolished with other structures on the property.  Faced with these short-term elements of the prospective relocation and restoration project, in May 2011, the Archivist contacted the Texas General Land Office to determine who received the initial land grant for the property formally known as the Wunneberger tract.

In October 2011, the Lakeway city manager solicited for relocation and restoration proposals from local private contractors.  He concurrently made a formal presentation to the Lakeway Civic Corporation for supplemental grant funding for the project, which was subsequently approved for over $20,000.  In November 2011, the cabin was relocated from its original site to the location just north of City Hall.  Notably, the orientation of the cabin is exactly as it was when it was originally constructed circa 1870.

In March 2012, a professional restoration and preservation historian, formally associated with the Austin Pioneer Farms project in North Austin, formally inspected the progress of Lakeway's August Liebelt Log Cabin Restoration Project.  In his words, "If I had to offer a grade for the work up to date, I would give a B+...the structural integrity is done well to support the overall good condition of the cabin, the roof and stone work blend(s) well with a home-built structure giving the overall impression of a 19th Century do-it-yourself project, which this clearly is, and is portrayed well as such." Now, it remains the responsibility of the City of Lakeway and its dedicated citizens to continue with an accurate credible effort to complete the project and ensure the history of rural Texas is sustained for generations to come.